Home » Who We Are » Trustees » Anita Sengupta – CEO Hydroplane Ltd. and Professor of Astronautical Engineering 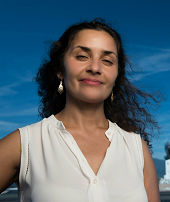 Dr. Anita Sengupta is an aerospace engineer, instrument rated pilot, rocket scientist, and veteran of the space program. She has developed technologies that have enabled the exploration of Mars, asteroids, and deep space for 20 years. She worked NASA for 16 years where her engineering projects included her PhD research on developing the ion propulsion system for the Dawn Mission (currently in the main asteroid belt), the supersonic parachute that landed the Curiosity rover on Mars, and the Cold Atom Laboratory an atomic physics facility on board the International Space Station. Next, she became Senior Vice President of Systems Engineering at Virgin Hyperloop. She is currently CEO and Founder of Hydroplane Ltd, an aviation technology company developing a hydrogen fuel cell powerplant for aircraft. She is also a research professor of astronautical engineering at the University of Southern California.