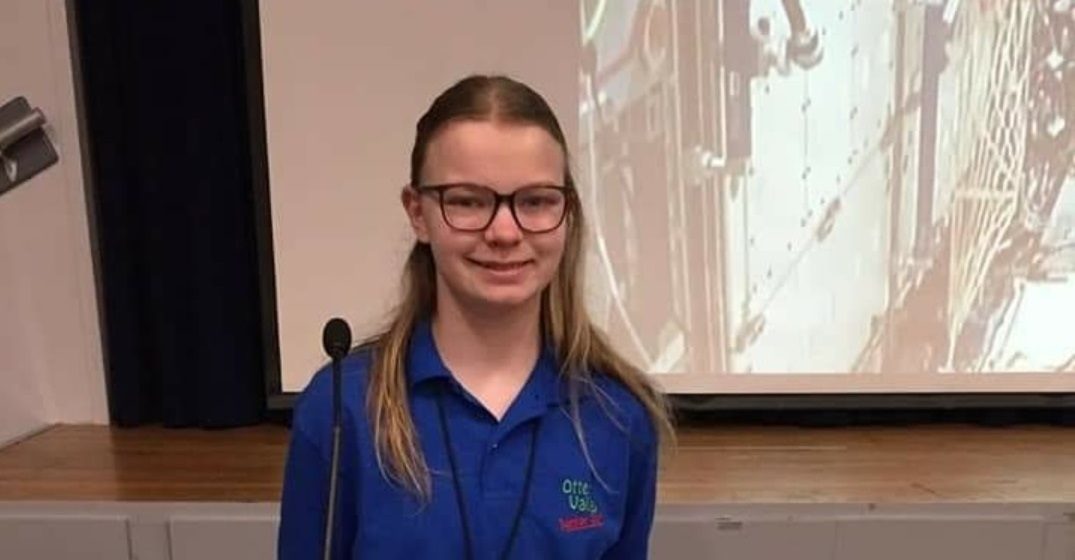 The distance between George-Little Rock Middle School & High School in George, Iowa, and NASA’s Lyndon B. Johnson Space Center in Houston, Texas is 1,098 miles. It’s also how far Ashley Stueven would travel every year during her first three years in high school to pursue her love for science—a love that would ultimately bring her together with a class of kindergarteners.

Ashley’s journey didn’t start out in STEM. As far back as she can remember, she always dreamed of being a teacher, spending countless hours playing “school” with her siblings. Then as a fifth grader, Ashley decided to try out for band at George-Little Rock High School and immediately fell in love with it. “I hadn’t really ever connected with any sports before so that quickly kind of became my sport. I spent a lot of time practicing and I really enjoyed it a lot!”

It wasn’t until she saw her older brother participate in the STEM program in high school that she decided to get more involved. As it turns out, at the time her brother happened to be participating in the NASA Johnson Space Center Space Settlement Design Competition. When you’re Ashley and you’re in the 7th grade, that can be really cool.

Although her high school didn’t have a formal STEM program, Ashley decided to create her own ad hoc STEM experience by taking extra chemistry and physics classes. She also followed in her brother’s footsteps by traveling those same 1,098 miles each way to participate in the Space Settlement Design Competition.

Then, as a senior, she had a chance to work on a passion project as part of Genius Week—a time where George-Little Rock students get to explore their interests while also giving back to the local community. Initially she planned on job shadowing which she’d done the previous year. Then her mom suggested trying to find something she could do with kids–that was just the spark she needed.

With the help of her gifted teacher, Ashley was able to brainstorm a Genius Week project that combined her love of music and STEM while also having a chance to work with young learners. She requested SAE’s A World In Motion (AWIM) Making Music STEM classroom kit from their regional STEM office at Iowa Lakes Community College in Esherville, Iowa.

Over Christmas break, she worked hard at developing her lesson plan. Because the Making Music AWIM STEM experience is typically geared towards students starting in first grade, she paid special attention to adapting the lesson and activities to a kindergarten audience.

The first day she shared her Making Music lesson plan with four students. In typical STEM/engineering fashion, she took notes about what the students liked/didn’t like and adapted her lesson plan for day two. The kids absolutely loved it!

It’s hard to explain what a soundwave is—especially to kindergarteners. But the AWIM kit helped bring the concept to life by allowing students to actually see the sound waves. When Ashley placed the tuning fork in the water, their eyes immediately lit up. They were able to quickly understand what she was talking about thanks to her fun, STEM-inspired learning experience.

Following her passion project, Ashley presented what she did to members of the George-Little Rock School Board. “I had a chance to show that the arts and STEM can be doing a lot of good even in a small school like mine.”

Now in college, Ashely is continuing her dream to be a teacher majoring in music education. Although she was originally focused on grades 5-12, based on her experience with those kindergarten students she has since expanded her focus to include grades K-12.

Join the SAE Foundation as we celebrate 35 years and champion equitable PreK-college STEM education to inspire the next generation of inclusive, STEM-fluent innovators.

Consider a monthly gift of $35 to give a young learner access to SAE’s enriching, hands-on AWIM STEM program.

This entry was posted in Early and Primary Education, Iowa, Life & Physical Science, News From Us, Stories, Teachers & Volunteers. Bookmark the permalink.