When Hattie Rice came to the University of Colorado, Boulder, as a first-year student, she knew what she wanted—an inclusive space to learn and grow. Now entering her senior year, the aerospace engineering major and computer science minor is challenging potential employers to provide the same support and opportunities as her lab at CU Boulder. 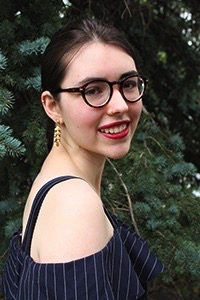 “My program is pretty interesting because I think unlike an electrical or mechanical program, we have a decent percentage of women and a decent amount of queer people—though I may be biased because I’m friends with all of those people,” Rice said. “But it is nice because I do feel like there is support from the top and I feel like that precipitates down to my peers most of the time. I feel really lucky to be in a position where I haven’t walked into a room and been the only woman or the only queer person there and then felt like I was a burden or intruder. So, there’s a lot to be said for that because I know a lot of folks don’t get that.”

In thinking about her next steps after graduation, Rice has concerns for herself and her peers that they won’t be so lucky in the professional world. As a board member of the CU Boulder chapter of oSTEM (Out in Science, Technology, Engineering and Mathematics) for the first three years of her education, Rice was part of a group that brought representatives from professional organizations to campus to talk to students about the opportunities they had at their companies for young professionals.

While some had supportive employee resource groups or a welcoming attitude that showed a desire for diverse perspectives, Rice said others were more obviously putting on a show to look good, and none of the representatives from any of the companies identified as members of the LGBTQ+ community. When the group asked for representatives who were members of the community to be sent, many companies responded that they didn’t have or know of any.

“It’s understandable sometimes because a lot of [support programs are] just starting and a lot of times they haven’t been able to create that community yet, so they’re still working on it. But it’s also really weird for them to be like, ‘We support you, but we can’t find a single one of you in our company to send and talk about their experience here,’” she said. “They’re trying to make the space, but they haven’t found it yet, and that’s because we’re in such a weird transitional period with diversity and inclusion. And it’s interesting to be going into the industry at the same time that a lot of it is starting to conglomerate into actual change, and myself and my peers are trying to determine what is authentic and what isn’t? What are safe spaces and what aren’t?”

For her part, Rice has become a vocal supporter and driver of diversity and inclusion in the workplace. Through her involvement with SAE International, Rice spoke on a diversity panel at SAE’s AeroTech Digital Summit in March 2021, shining a light on challenges queer people face in engineering. She was pleased to find members of the panel and others in attendance were receptive of her message, and willing to offer support in furthering acceptance and inclusion in the workplace.

That starts with the little things, Rice says.

“I’m cisgender, but I really want to be able to have my pronouns in whatever sort of work correspondence I’m sending, and I want to know for my trans friends and colleagues that they are safe to do that and that I am supporting them,” she said. “I want us to be able to have conversations about our partners in public and we’re not going to make it weird. I’m not going to have somebody look at me differently because I say, “Oh me and my partner or me and my girlfriend went somewhere.’ It’s [the question of], ‘Can I be a normal human with normal human things in my life and talk to you about them in a way that isn’t disguising parts of that normal humanness?’”

As Rice and her cohorts prepare to leave college and take their knowledge to the next level, they’ve demonstrated their readiness for the world. The only question left to answer, then: is the world ready for them?

This entry was posted in News From Us, STEM Diversity & Accessibility. Bookmark the permalink.