An ideal working environment brings together individuals from diverse backgrounds whose unique experiences and perspectives allow for new ideas through multiple forms of personal expression that contribute to one cohesive goal. This is as true for students as it is for professionals—and our A World In Motion (AWIM) PreK-8 STEM education partners have incorporated that truth working with Native American students in their classrooms.

Educators Rae Herman, Beau Herman, and Evelyn Bigby—brought to AWIM at different points of their careers through Mary Ellen Earnhardt and her work at the Montana Office of Public Instruction—have found that our STEM programming provides non-threatening and multifaceted education opportunities.

The schools in which they work and support after school programs have student bodies made up predominantly of Native American students living on reservations in Montana and Oregon. Through AWIM, these educators give their students opportunities to learn on their own terms while expressing their unique cultural identities and experiences. 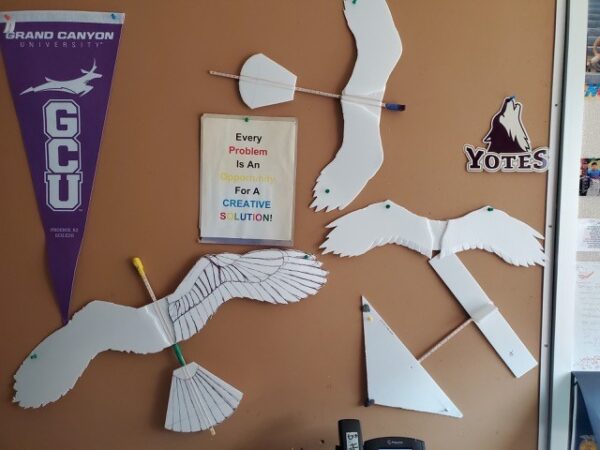 “I will tell you, all of our students love this, but the aspect that I see when our native students pick up on what’s happening and they grasp it—it’s in their artwork. They bring their culture into what they’re designing…and seeing the designs they come up with through their artwork and the way they story tell through A World In Motion products is great,” Rae Herman said.

Beau Herman added, “There’s been a huge impact with the AWIM products. If I just give a group of students a group essay or a trifold board research project, it’s not going to get the same [result] as them building a car or building a glider and being able to have some input in the design itself where you can bring your culture, and everybody can have a bit of their culture in their gliders or car design.”

Bigby explained that for indigenous students, that cultural experience unfortunately comes coupled with a lot of pain. A history of trauma suffered by the Native American community can impact the expectations students come to school with. Having witnessed first-hand mistreatment of their peoples combined with a message of a historically justified mistrust of non-natives from their elder family members can make it incredibly difficult for students to thrive in a traditional academic environment.

To combat these challenges, these educators have had to seek creative solutions that allow students to process their experiences and participate in education in a way that is best suited to their individual needs.

“The students have a lot of trauma, especially on our reservations. When I moved here to Oregon, the stories that I heard coming out of here of [graphic stuff] that our students have seen [affected them], and I’ve had some of those students in class,” Beau Herman said. “It’s this trauma that has been passed down  through the generations and is ingrained in them, and then they see these things and they shut down and close themselves off.”

The first step in helping students heal comes with representation. For many students coming from the reservation, the lack of representation of Native Americans on the teaching staff at their off-reservation schools can present an invisible barrier that these educators are actively seeking to combat.

“We have a predominately Native American population with a predominantly non-native teaching population, but we’re making inroads. I am an enrolled member of the A’ani tribe, and my assistant principal is an enrolled member of the Nakota tribes, and we’re getting more and more native teachers coming here, so the outlook is positive,” Bigby said of her work as principal at Harlem Elementary School.

Beau Herman is making similar strides through his work in Oregon, stressing that students need positive role models that look like them. Rae Herman recalled an instance early on in Beau’s time in Oregon that he shared with her that demonstrated just how valuable representation is in the classroom.

“Beau told me when he moved to Oregon…how the principal had looked at his class and said, ‘I can’t believe these native students are talking to you like this. They don’t connect with some of our other teachers.’ And reminding him that you look like they do, and they listen to you,” she said.

As this trusting relationship is developed in the classroom and through afterschool offerings, the educators are able to build opportunities that speak to the way these students learn.

At Bigby’s Harlem Elementary, AWIM kits are being incorporated into the 6th grade science curriculum, helping to showcase how different approaches to learning make these concepts more accessible for all students with all different learning styles.

“This class is known as the busy class,” Bigby said, noting difficulties some teachers had experienced with students to command their attention in the classroom in the past. “They are thriving because they are working with their hands and they are communicating with each other. It gives them so much confidence and I’m so excited to see if we can provide more hands-on learning opportunities for them.”

The environment the students are finding is one that takes into account their backgrounds as well.

“As we’ve mentioned, Native Americans have been traumatized. Here you’re doing something that’s not threatening to them, and that’s why it’s successful. That’s why it works. And they’re finding success, breaking their wall down and connecting with their senses by using hands-on learning with real-world math and science context, and that’s really important,” Earnhardt said.

Bringing these experiences to students and showcasing that people that look like them are doing the work allows the students to envision themselves in a future career that applies the concepts they’re learning. They begin to realize they can work across cultures to complete this work while infusing it with their unique insights and experiences.

Connection is the key ingredient to success, and AWIM is allowing those connections to be made.

“What I like about the AWIM kits is there is this connection to the real world besides it just being a product or project. As we work through these things, they understand that, ‘Yes, okay, I can go into engineering. This actually makes sense when it didn’t before,’” Beau Herman said. “We are interconnected, and through these kits these kids are able to understand that we’re all working towards this common goal.”

Help the SAE Foundation deliver world-class, hands-on STEM learning experiences to students who would otherwise not have access. Make your gift today.

Rae Herman has been a leader in Montana Afterschool Program for over 10 years. She has been a leader in her community as well as throughout the state, and has been instrumental in providing the programs in Montana that are 21st Century Community Learning Centers (CCLC) with AWIM challenges to enhance student learning. The program that she over sees in Hot Springs, Montana sits on a Native American reservation.

Evelyn Bigby is an educator and principal in the Harlem School District (made up of more than 90% Native American students) and helped run the afterschool programs in her school.  The US Department of Education used Evelyn’s Harlem program to observe her 21st CCLC programs.

Mary Ellen Earnhardt has worked as an educator and counselor for over 30 years with students in kindergarten through college, and has worked  in the Office of Public Instruction for more than 17 years. She’s spent the last 10 years as the Director of 21st CCLC and MT After School Programs. She is now the Career Lab Supervisor for the Department of Labor.