Navy Veteran Goes Back to School, Competes in Baja SAE

“If you can get it running, go ahead.” That’s all Chad Bear needed to hear from his dad before he launched into fixing up the 1968 Bridgestone 50 motorcycle that was given to him by his Uncle Ron. The bike had been sitting for years and didn’t start but that just made it even more of a challenge.

As soon as his dad left for work, Chad starting cleaning the carburetor and spark plug and putting everything back together. By the time his dad came home for lunch, Chad was already riding laps around the backyard. From that point on, tinkering was hardwired into his DNA—something that ultimately led him to competing in Baja SAE years later as a nontraditional student.

At 17, Chad joined the Navy where he had a chance to travel the world with stops in Nova Scotia, England, France, Italy, and Israel, just to name a few. Once he retired from the military, he enrolled at the University of San Diego through the GI Bill with a major in mechanical engineering. 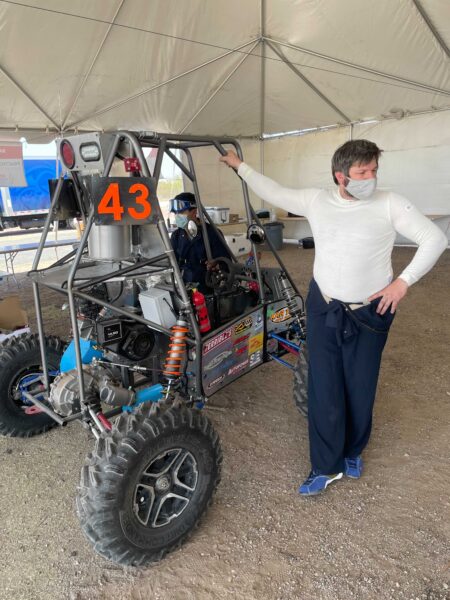 His first semester on campus, Chad saw a Baja SAE buggy on display and was immediately curious. He started asking classmates about the competition and Baja team at the university. Although it was part of a senior capstone project, in 2019 Chad was one of two juniors allowed to help out–then the pandemic hit.

What started as the university being shut down for a few weeks, turned into many months, and then a year. Once everything went remote, the Baja team wasn’t sure if there would even be a competition at all. If there was, they’d have to navigate extremely limited access to the machine shop on campus, travel restrictions from the university, and the inability of their team to get together in person.

Just like he’d done so many times tinkering in the garage with his dad and during his time in the Navy, Chad was more than ready for the challenge. 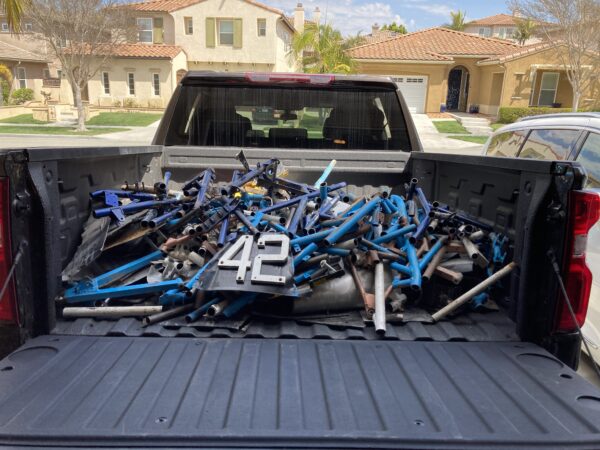 In mid-July, with the support of his wife and two young children, he loaded three or four pickup trucks full of Baja SAE parts from the machine shop at the University of San Diego and moved everything into his garage at home.

Teammates divvied up the work as best they could, cutting, bending, and welding parts on their own—only meeting at Chad’s garage if they lived close to San Diego and could do so safely around the pandemic.

It should come as no surprise, but even with all of the challenges Chad’s team still found a way to “get it running” at the Baja SAE competition in Tucson, Arizona. The team took 1st place in the sled pull, 6th place in suspension, 8th in maneuvering, and 22nd in acceleration.

After his experience with Baja SAE, Chad is continuing to pay it forward—serving on the SAE SoCal Local Section Board to help all students in Southern California wanting to start a Baja team on their campus.

This entry was posted in California, Life & Physical Science, Stories. Bookmark the permalink.